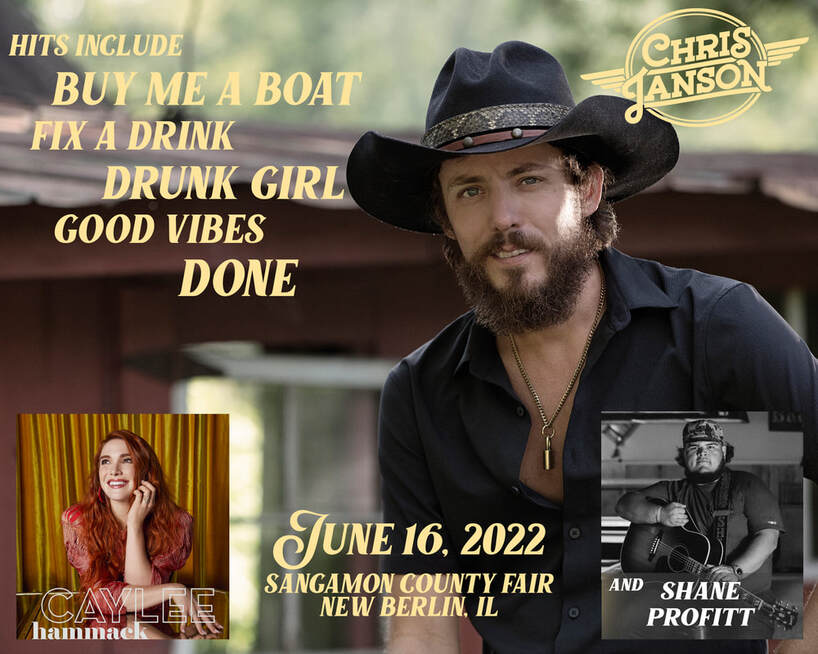 Who is Chris Janson? He’s a “live legacy in the making” (Rolling Stone). Breakout country star Janson is a platinum-selling recording artist, high-octane entertainer, multi-instrumentalist, and award-winning singer/songwriter who Bobby Bones has named among the greatest six live performers in country music. The ACM Award-winner has collected prestigious accolades that place him amongst country music greats. Both his inspiring hit “Drunk Girl” and his chart-topping, 3x Platinum smash “Buy Me A Boat” were named among NSAI’s “Ten Songs I Wish I’d Written” lists – making Janson one in a handful of the industry’s most elite artists to earn the title multiple times. “Good Vibes,” the flagship single from his 2019 album Real Friends, and follow-up “Done” each topped the country charts, bringing his total of No. 1 songs to four – and now the hit-maker is entering a new chapter with “Bye Mom" from his fourth studio album ​All In which just released on April 29th. The single, derived from the real-life story of co-writer Brandon Kinney, is a triumphant ode to unconditional love. It was most-added upon impact at country radio and earned the highest first-week streaming total of Janson’s career. In addition to his own successes, the talented songwriter has lent his pen to industry peers including Tim McGraw (“Truck Yeah,” “How I’ll Always Be”), LOCASH (“I Love This Life”) and the legendary Hank Williams Jr. (“God Fearin’ Man,” “Those Days Are Gone”). Catch Janson’s “crazy harmonica skill and… riveting stage style” (People) this summer and see for yourself what makes him an “undeniable star” (The Tennessean).

General admission tickets for the show can be purchased for $35 and are available now at www.sangcofair.com. Grandstand admission does not include fair gate admission and will need to be purchased separately.

Born in Ellaville, Georgia, the prodigiously talented young girl braved a medical scare and a bad love that was the catalyst for her turning down a scholarship to Belmont University. Destiny – and a big lion heart – wouldn’t let the girl who saw Loretta Lynn at the Columbus Civic Center at 13 miss her life’s purpose. You can hear it in the quavering homage in “Sister,” the wide open power-resilience of “Mean Something,” or the straight up country of “Forged In The Fire” and the pensive truths of “Looking for a Lighter.” Hammack slices into the gentle essence of meaningful desire with grace and compassion. For the producer/songwriter/power-singer, love and wanting transcend romance.

After the guy who “needed space” moved into a doublewide with another woman, Hammack packed her things, grabbed her dog and drove 399 miles to Nashville. When her hotel seemed sketchy, the fiery young woman put her stuff in her car, with an air mattress in the back and headed to the Target nearby. "The first time I saw a true snowfall was in that Target parking lot,” she says. “Suddenly, I felt like I had a clean slate, like all this heartache was washed away.”

Like Ziggy Stardust falling to earth, Hammack’s landing wasn’t simple. She took the early shift at storied Lower Broadway honky tonk Tootsies, where Willie Nelson and Kris Kristofferson once drank on credit. She got a publishing deal, made the rounds, dug in; learned how hard it is, writing “thought it’d take a couple months in a ten-year town” in “Mean Something.”

At 23, she had her house burn down while away on a songwriter retreat, losing just about everything – except for a few parts of her story including song inspiring pieces such as her grandmother’s quilt.

“God gave me the fire, and the medical scare (at 16) to show me how short life can be,” marvels the unsinkable songwriter. “It woke me up and taught me a couple of things I need to know. Life is short. People love me. Material things don’t matter.”
​
After her life was turned upside down in the fire, Caylee Hammack doubled down. She and Mikey Reaves (co-producer) started spending 10, 12, 14-hour days in a windowless room foregoing air conditioning, to capture all of the sounds heard in their heads. When they turned in "Family Tree,” legendary publisher Cyndi Forman had the idea to hold it – as she saw there really was an artist future for the young writer. Power manager Mary Hilliard Harrington stepped up to manage; Universal gave her full creative control of songs, sounds, players and mixers. “The joy of being a songwriter is: life hands all of us shitty situations, but for three minutes, even if the song doesn’t resolve the problems, it can ease the pain,” she confesses. “Or at least make you not alone in it.”

“Not alone in it” will ripple out to every young woman who hears – and sees, feels, recognizes -- these moments. Whether the litany of little lives that includes Tupperware parties, 7-Elevens, selling a dryer to raise bail, pot luck lunch and hanging laundry which defines the plucky “Family Tree,” the clothes line tightrope and dare devil high hopes childhood of the brazen “Redhead,” the staggering red lipstick on your white sheets lust of “King Size Bed,” or the jaunty emancipation exuberance of champagne on the plane/big tipping the pool boy bartender of “New Level of Life,” Hammack savors the details. “I love words and stories and books,” she admits. “It gave me a reason to be and a way to connect. By telling some of my stories, I give others a safe place to tell theirs.”

It’s not just the lyrical load, though nearly every word is true. Just as importantly, the ferocity with which Hammack and Reeves came at these songs compels. Whether the unvarnished “Gold’ that sets up the Green Day on Minnie Pearl carnival at Madonna’s house on “New Level of Life,” or the almost Doris Day musical turn that dissolves into churning buzz saw thrash on “Just Friends,” this molten country hybrid suggests Courtney Love, Gwen Stefani or even Ariana Grande could have a place in today’s post country reality.

“I wanted to fit Dolly Parton and Weezer into a song,” she says without irony. “Cake, Bowie, Loretta, The Band, Tom Waits. Why not? My two favorite songs are ‘Operator’ by Jim Croce and ‘Don’t Fear The Reaper’ by Blue Oyster Cult. Who can write a song about something so dark and make it so beautiful, then create a track that just does that thing? It moves you.

As comfortable with jackhammer intensity as more traditional forms, as a producer, Hammack seeks to match the emotion to the recording. It’s not enough to hear the story, she wants you to experience the vascularity of it.

Whether it’s the swaggering Tammy Wynette come-uppance “Just Like You” or vulnerability and awe that permeates “Looking For A Lighter,” these tracks pull you in, slap you around or console you beyond words. Hammack understands, because her feelings fall around her in songs.
​
“I had a high school education and that fake ID I used to get gigs at Tootsies,” she marvels. “I had Lynn Anderson’s drummer, Merle’s guitar player and Loretta’s bassist onstage with me some shifts. It was a fairy tale for a young musician. But there I was on my 23rd birthday, rummaging through my kitchen junk drawer – and I find that ID I’d just outgrown, the letters from the guy who broke my heart and I sat there on the kitchen floor reading those letters over and over again.”

It’s no wonder some of country music’s most potent women have thrown in on Hammack’s debut. Whether it’s Reba’s sassy “girl, I know” vocal on “Redhead” or emerging writer/artists Ashley McBryde and Tenille Townes on “Mean Something,” Hammack is setting a bar for women across the genre.

IF IT WASN’T FOR YOU arrives to mark country’s modern/classic transition. Pulling from the past, threading across genres and reaching for the most brutal revelations about what it means to be 20-something, female, raised with little money, but lots of family, love and dreams, it’s a groundbreaking tradition that’s driven Tanya Tucker, Kacey Musgraves, Shania Twain, Patty Loveless and the Dixie Chicks.
​
“My Dad told me, ‘The strongest and most beautiful things are forged in the fire. Glass is just sand without it; iron is worthless until it’s heated over and over.’ I think about that... “For me, the day I walked my mother in through the artist entrance at the Opry, felt like my graduation day. You know, you can win an award, and you sit it on your shelf. But if you touch a life, it lasts. Every time they think about that moment, or they hum a song you wrote, or remember where they were when they heard it, that’s what matters.”
​

Standing ovations & excited audiences are nothing new for singer and songwriter, Shane Profitt. The 22-year-old Authentic Maury County country boy, born and raised in Columbia TN, Shane has a natural ability to connect with a crowd. His country boy charisma, his powerhouse voice, and undeniable ability to light up a room, are some of the best parts of why Shane Profitt is a natural born STAR.

He’s toured most recently all over the country with Chris Janson on the Halfway to Crazy Tour, including a sold-out show at the Ryman Auditorium, where Shane received multiple standing ovations. Shane is an accomplished songwriter with Janson’s Old Tom Music Publishing, where he has secured hits recorded by Janson & others.

Shane is a natural storyteller & unbelievable songwriter, who writes all of his own songs. Janson says: “Shane is an amazing songwriter. A REAL songwriter. In addition, Shane is a great artist, and even greater human. He was turning in songs that were absolutely blowing me away. I will never forget hearing “Country Boys Will Be Country Boys” for the first time in my cabin, says Janson….I hollered into the other room to Kelly, “I’m fixin’ to get this guy a record deal, watch this!”

​The rest is history.
​
BUY TICKETS